With aiming the goal of the activity, the works have been initiated with making two assessment studies: Assessment of the National Water Policy of Myanmar (NWPM) and Assessment of the Current Situation of Water Security and Climate Resilience Aspects in Myanmar. After that, identification of these aspects to be integrated in NWPM, how to implement the integration process by means of consultative meeting which will be held among multi-stakeholders from water sector. Finally, selecting and prioritizing the action plans for integrating water security and climate resilience aspects into the NWPM.

To implement the one of action plans as a pilot study which has been selected from already identified National Adaptation Programs of Actions (NAPA). It is selected from water resources sector according to the prioritization of NAPA action plans. Accordingly, selection has been done for a particular area region within the country for pilot study to develop regional rainfall-runoff relationships. For that, Magwe Region has been selected for pilot study and collecting available data including historic records for rainfall and runoff data of streams that are situated in the region. Based on these collected data, regional rainfall and runoff relationships will be developed and these relationships will be given as input to identify and support the country flood early warning system establishment to be able to ensure and making decision for sustainable water management

While preparing for the selected topic activities within this year 2015, during the period of middle of July, heavy rainfall occurred and compounding to this with the effect of Cyclone Komen that have brought heavy rainfall to many parts of Myanmar especially in Chin State, Rakhine State, Sagaing Region and Magwe Region. Due to unusual rainfall phenomena, some of the dams and communities in Magwe and Sagaing Region have been impacted by floods, quite surprising and amazing outcomes. The dams are nearly overtopped and the bridges are threatened to wash away although there are no potential mishap up to now. Attention is paid for study of this rain-induced flood disaster specifically for the one of the river basin that is Mone River Basin which is situated inside the Magwe Region. On the Mone River Basin, cascade of dams namely Mone Multipurpose Dam and Kyee On Kyee Wa Multipurpose Dam have been constructed in few years back. These dams have suffered abnormal inflow due to unusual rainfall phenomena and intensity. 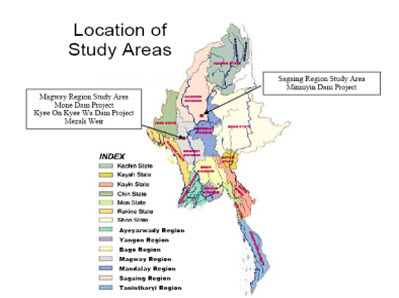 The study will actively engage for collection of data and study activities to get improved situation and sustainability of water resources for Mone River and infrastructures which were highly affected by the Cyclone. The data collected proved evidence of significant study for the following activities.
• To compute catastrophic flood for Mone Multipurpose Dam at which only 4.2 feet remained for 40 feet available free board, and compare with design flood concentrating on discharge, volume and duration.
• To determine the flow of interim catchment together with the outflow of Mone Multipurpose Dam both for the study of storage and release of downstream Kyee On Kyee Wa Multipurpose Dam and Mezali Weir.

According to the calculation done for the catastrophic flood of Mone Dam that was occurred on 31st July 2015, it is found that its magnitude was 453,567 cu.ft/sec and duration was 128 hours. This was the biggest flood since the completion of the dam in 2004. There has been found that a rising trend for flood in future. Using the one day maximum rainfall iso-chrome maps with different return periods for Mone River, it is found that the return period of this flood is more than 1000 years.

Recommendations for Flood Management in Mone River are as follows:
To select a new design flood, selection of PMF value based on PMP (Storm iso-hyetal map of two-day max. rain). To ensure proper watershed management practice including forest conservation and reforestation procedures. To provide auxiliary/additional spillways at appropriate locations from dam safety point of view. To calculate back water curve at upstream of Kyee On Kyee Wa Dam up to Setoketayar Town and protection embankment should be provided to prevent inundation. A proper rainfall-runoff model should be formulated. Tele-metering stations both for auto-rain gauges and water level recorders should be installed to support Early Warning System. Real time data should be in hand both at dam site and head office for immediate response.

The ever recorded maximum flood discharge is that which occurred on 8th October 1948 with the water level of 222.2 ft. This flood mark can be seen on the vertical wall of the under sluice of the Mezali weir. With the help of the weir formula, discharge was calculated as 317,000 cu.ft/sec. The maximum water level of 2015 flood at Mezali weir is 219.4 ft which is less than 1948 flood level.

In conclusion, the occurrence of Flood is a rising trend for Mone River not because of Dam construction but because of forest depletion, environmental deterioration and Global Climate Change. Three hours travel time between 2 dams should be considered to study reservoir operation and to prioritize flood regulating during rainy season for Kyee On Kyee Wa dam. Although 2015 water level at Mezali weir is 219.4 ft which is less than 222.2 ft that of flood occurred in 1948, the flood discharge

is very high at Mone River which is 453,567+110,528 = 564,095 cu.ft/sec. This flood discharge is reduced down to 285,906 cu. ft/sec at the downstream of Kyee On Kyee Wa Dam due to attenuation of flood by regulating of dams. Flood will come with a great surprise or within a very short notice and destroy everything if there is no such a kind of dams on Mone River.

In addition to the above study as a part of the broader case of regional study on the development of the regional rainfall-runoff relationships for supporting the development of the flood early warning systems and ensuring sustainable water management, the following study has been carried out for the unusual flooding events that happened also in the Sagaing Region. One of the dam projects in Sagaing Region has suffered overtopping of the flood water (reservoir water) over dam crest due to flooding which has occurred by severe rainfall in that area. Reformulation of the dam design has been done taking account of the new hydrological information (new probable design floods) after the current unusual raining events. The details of the study are described in the following paragraphs.

Irrigation Department under the Ministry of Agriculture and Irrigation of the Government of Republic of the Union of Myanmar has implemented small and medium scale irrigation projects within the short construction period with keep in mind the objectives of growing more paddy and other crops, flood protection and regional greening. Min Myin Dam Project is situated in nearby (2.5 miles away) Shan Gone Village, Kantbalu Township, Sagaing Region. The dam has constructed on the Min Myin Creek. It is intended to irrigate 2,000 acres of irrigable area as well as to produce hydropower of 40 KW and constructed by Assistant Director 2 Office, Construction Circle 4 of Irrigation Department since 2010-2011 and will be completed in 2015-2016.

It has suffered overtopping of reservoir water over the dam crest on 18th July 2015 due to heavy rain that occurred by climate change. The dam body has damaged in some extent but other appurtenance structures such as outlet conduit, spillway, etc. has no harm. To be able to repair the dam body and to safe enough such scale of flood without overtopping again, redesigning of the dam has been carried out. First, hydrological flood computation has been done by the Hydrological Branch based on the available current rainfall and hydrological data at nearby rainfall stations. Then, flood routing analysis has been computed with considering the 1000 year return period flood as a design flood and the standard project flood as a check flood. Based on the results of flood routing analyses, it is decided to raise up 5 feet in dam height and additional appropriate width spillway channel has to be provided. New typical dam cross section with 5 feet raised up in dam height, repairing and dam heightening procedures as well as design drawings of additional appropriate width spillway channel are produced. With these new features it may ensure the safety of dam in its design life.

Considering the 50 years design life for dam and average annual inflow, reservoir sizing and full tank level has decided. Adopting the 1000 years return period flood as a design flood and flood routing analyses have performed so as to fix the size of spillway as 80 feet and the height of the dam as 88 feet have adopted. Review of past and present records of observed rainfall, recorded monthly rainfall in July (2006-2014) is the maximum rainfall is 4.87 inches (123.7 mm) and minimum data is 1.03 inches (26.2 mm). Due to climate change and compounding of Cyclone Komen in 2015, from 1st July to 23rd July, measured rainfall is 34.8 inches (883.9mm) in the reservoir area.

Due to the impact of climate change, heavy intensity raining within the short duration has occurred in the Min Myin Dam Project area resulted in short period (about 3 hours) overtopping of reservoir water over the dam crest happened. Unexpected amount of reservoir water spilled out from the spillway caused some extent of flooding occurred in the downstream of dam. With incorporating the 2015 July flood data, new probable design floods including standard project flood as well as probable maximum flood have been produced. Using the 1000 years return period flood as a design flood and the standard project flood as a checked flood, decision has been made to raise up 5 feet in dam height and additional 80 feet width spillway channel has necessary to be provided. With these new features of the dam and its appurtenance structures it is aiming to ensure the safety of dam in its design life.