During the year, Vietnam Water Partnership reviewed the existing irrigation management status and plan as well as drafted a proposal for new irrigation management plan. Two key government institutions, Ministry of Agriculture and Rural Development (MARD) and Ministry of Natural Resources and Environment (MONRE) of Vietnam, are fully supporting the implementation of the activities that are under WACDEP program. Vietnam Water Partnership also coordinated closely with National Focal Point of Vietnam to UNFCCC, which will utilize the results of this program into other program of climate change agenda in the country. 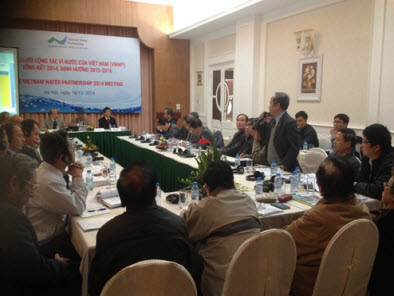 The review and drafting were conducted through consultant deployment and series of consultation workshops. In total 76 people from 22 institutions were involved in consultation workshops. The new plan proposal has been integrated climate change resilience and water security. In 20 November 2014, Vietnam Water Partnership has submitted the proposal to governments for getting final feedback. Subsequently, this proposal also has been consulted to wider stakeholder groups in national workshop which conducted in 16 and 17 December 2014 and attended by 27 stakeholders. The proposal of new irrigation management plan will apply in two specific irrigation systems in 2015. Based on the field level try out, Vietnam Water Partnership will develop proposal of replication road map for integrating climate resilience and water security in other irrigation systems.

Continuing the activity on 11 September 2015

Based on the assessment result, VNWP reviewed the existing plan with consultation with Thai Binh Irrigation Department. Currently, the proposal for new irrigation plan with integration of climate change resillience and water security is still in finalization process and will consult with wider stakeholder to finalize.

Progress of the Activity on 2016

Vietnam is one of the most affected countries because of climate change. Insecure water there will be no food security and affect energy security. “By 2050, about 8.4 million people in Vietnam lack of fresh water due to climate change”. This is the warning of Asian Development Bank (ADB), because Vietnam is one of the 5 countries most affected by climate change and natural disasters. Millions hectares of land will be flooded, ten millions of people lost their homes due to sea level rise, saltwater intrusion into the interior, while the number of people living in rural areas accounts for 73% population of the country, thus poverty will increase from 21-35%.

Results of integration climate change and water security in irrigation management in Vietnam was highly appreciated by Vietnamese authorities as well as a number of international organizations in Vietnam at the seminars.