The Water, climate and development programme Lao PDR aims to develop stakeholder analysis and roadmap for capacity development on water security and climate resilience. Series of consultation meetings were conducted from June to September 2014 to gather inputs from stakeholders at national, province and river basin level.

In total 404 people from 55 institutions were involved in the meetings including public, private sector, academia and provinces throughout the country. The main finding from the series of consultations is that the knowledge of local communities in river basin about climate change is still limited. However, most stakeholders consider climate change as a challenge to find appropriate solutions for. Based on the findings, the Lao Water Partnership drafted a National Capacity Building Plan on Water Security for Climate Change Adaptation and Management. 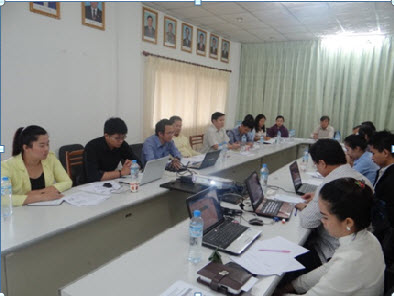 The plan consists of adaptation and mitigation options in key sectors in Lao PDR, water security for the climate change, roadmap for water security and climate change adaptation, and capacity building plan 2015-2020. This draft has been consulted in a technical workshop, attended by 47 national stakeholders on 19 December 2014.

Subsequently, the plan was approved as a national action plan by Department of Water Resources, Ministry of Natural Resources and Environment, Lao People's Democratic Republic and will be used for national, province and district level capacity building program.