To strengthen the knowledge capacity of female leaders, members of the community and the media in the Far North Region of Cameroon on dental fluorosis, the Cameroon Country Water Partnership (GWP-Cmr) organized a two-day training from June 24th – 25th in Maroua, Cameroon

The training is within the framework of the implementation of GWP-Cmr’s AIP Water, Climate, Development – Gender (WACDEP-G) pilot project on dental fluorosis - with support funding from the Swiss Development Cooperation. The main objective of the training was to sensitize the participants on the dental fluorosis issue in the Far North Region, (causes, impacts, proposed solutions) so they can better support the on-going sensitization activities to reduce stigmatization of affected persons in the region and beyond. It was attended by representatives from government institutions (Ministry of Water Resources, Meri Council), religious leaders, women leaders of women associations, project partners (ACEEN, CEDC, WESDE) and community /national media outlets. 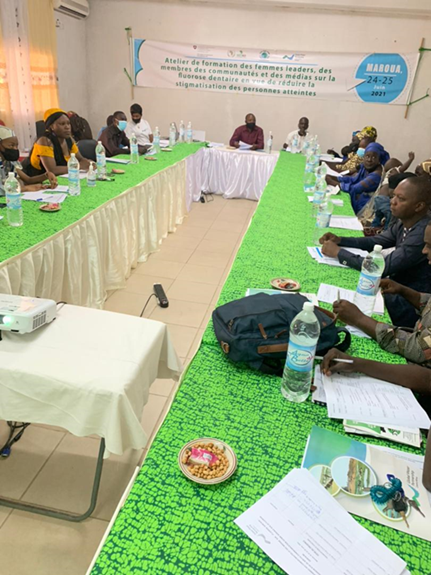 In a very interactive session, GWP-Cameroon’s Technical Committee Chair and Hydrogeologist, Dr. Fantong Wilson explained that contrary to local beliefs, consuming water with a higher fluoride level than recommended by WHO, (1,5mg/l) is the principal cause of this irreversible disease which affects the teeth and causes bone deformation in more severe cases. 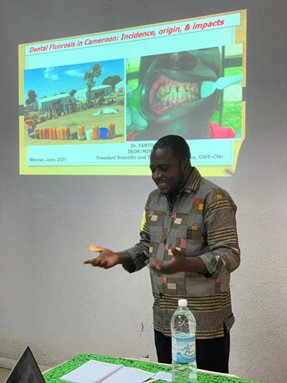 He further explained that the rock types in some parts of the region is the principal cause of the high fluoride concentration in ground water, which is the main water supply source for the inhabitants of the Mayo-Tsanaga sub-basin in the Sahel zone. “Of the 36 water points tested by GWP-Cameroon during a past study in the Meri village and surroundings, only 4 had the acceptable concentration of fluoride”, he explained. Participants shared personal stories from the communities on ‘treating’ the affected teeth and asked questions related to the Ministry of Water’s intervention with regards to this problem (water points construction) – all of which were addressed by the experts.

GWP-CAf technical assistants, Sima-a Bernardine and Nadine Fragniere gave an overview of the defluoridation process put in place by GWP-Cmr and partners. The process which involves using charred cow bones in adapted household filters to reduce fluoride in drinking water was intriguing to the participants who wanted to know when these filters will be available to the population and if they could try the carbonization process of the cow bones at home. “Science takes time! This process has been ongoing since 2017 and we still have more tests to do. We understand populations impatience and that is why this sensitization phase is the priority- the media has to help pass this message”, explained Hycinth Banseka, GWP-CAf Coordinator. 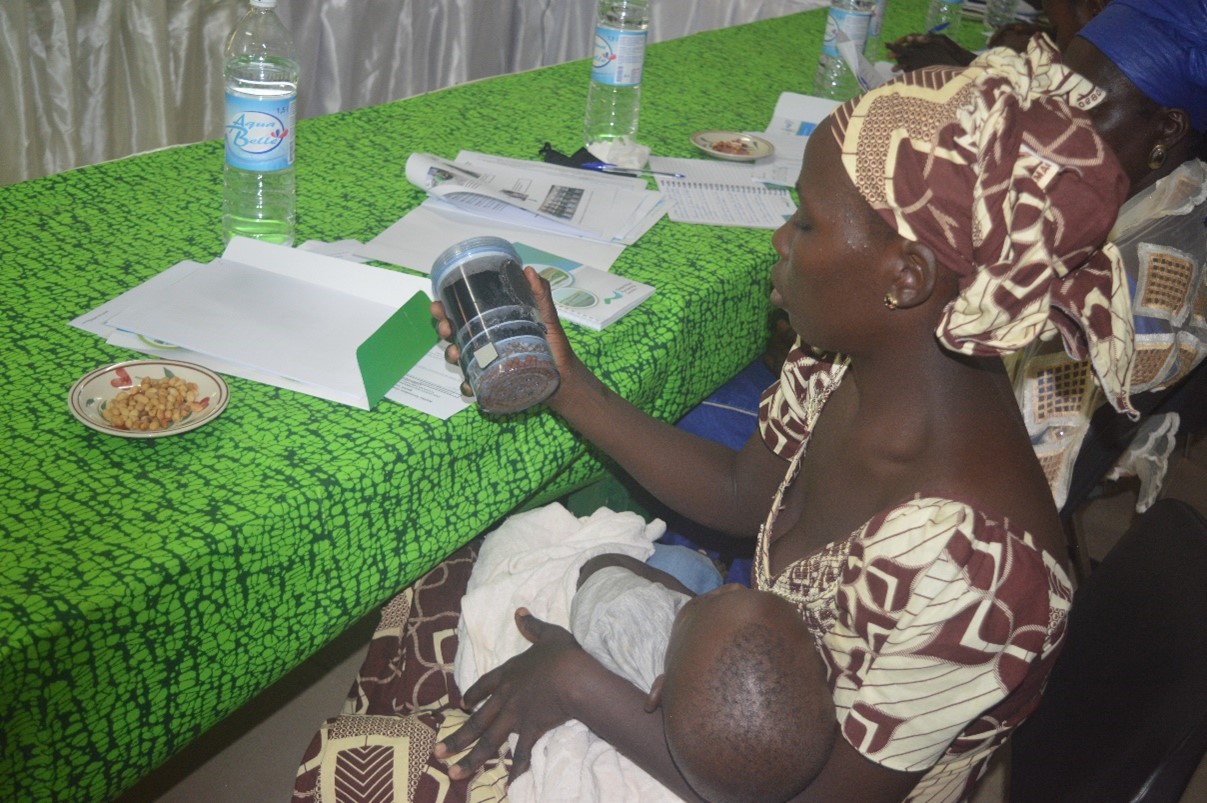 The gender sensitive messages and the video documentary on dental fluorosis to be distributed during this second sensitization campaign were presented to the participants. During the group work session, they made some amendments to the sensitization form to be used on the field by the women leaders, who have been key actors in sensitization activities within the communities. 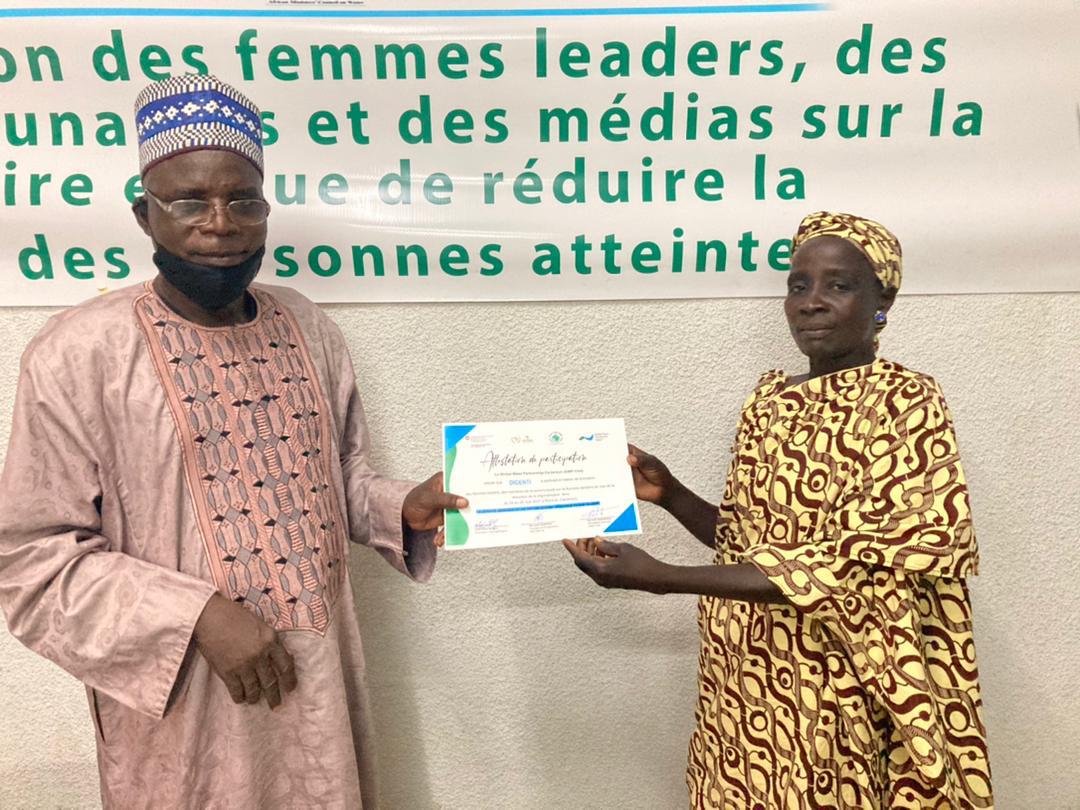 The involvement of the local and national media in reaching a wider audience, changing mentalities on dental fluorosis and reducing stigmatization of affected persons is very important. Fully aware of this, the second day of the workshop was specifically for media representatives.  Participants were given a recap of the first sensitization campaign while highlighting some key results like the fact that, some affected girls in the Douvangar village have re-gained their self-confidence and now read the liturgy and sing in front of the congregation. The objectives, target audience and expected outcomes of the second sensitization campaign were explained in detail to the media representatives. 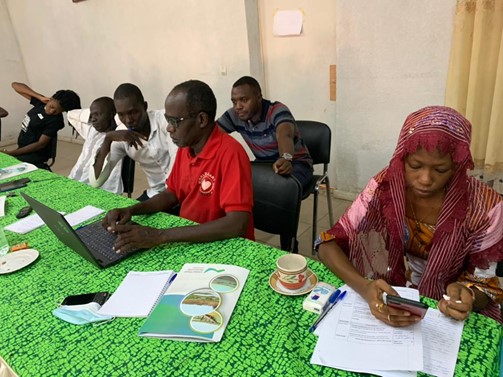 After bringing to light the gender specific impacts of dental fluorosis and with gender equality at the heart of the WACDEP-G program, it was pertinent that the media have a clear understanding of gender and how to adopt a gender-sensitive approach while communicating on dental fluorosis – a topic discussed in detail by the WACDEP-G Program Officer, Murielle Elouga and GWP-CAf Communications officer, Samyra Amabo during this workshop.

Recommendations were made at the end of the workshop with regards to media involvement in this campaign and how they can best support GWP-Cameroon in remarkably reducing the stigmatization of men, women and children living with dental fluorosis.