Within the framework of the AIP WACDEP-G program, GWP-CAf in collaboration with the Directorate General of Natural Resources and Energy (DGRE) STP and GWP Sao Tome and Principe (PNASTP) organised a virtual/in-person gender training for the Water, Sanitation and Hygiene (WASH) sector managers in Sao Tome and Principe from April 6th to 8th 2021.

The three-day training had as objective to build the knowledge capacity of the key actors on gender and Gender Responsive Budgeting to enable them identify problems related to water and gender, allowing them to intervene to correct and/or fill any gender gaps in the access and management of this resource to ensure the harmonious and sustainable development of the sector and the country.

It also aimed to raise gender awareness by demonstrating with concrete examples the need for gender mainstreaming to achieve the SDGs and promote climate resilient water investments. The training brought together over twenty stakeholders and began with an opening speech from Mme Valdemira Tavares, GWP STP Chair during which she emphasized the importance of addressing gender inequalities in the WASH sector, through the implementation of the gender transformative approach which addresses root causes of inequalities and promotes female representation and engagement in the sector. 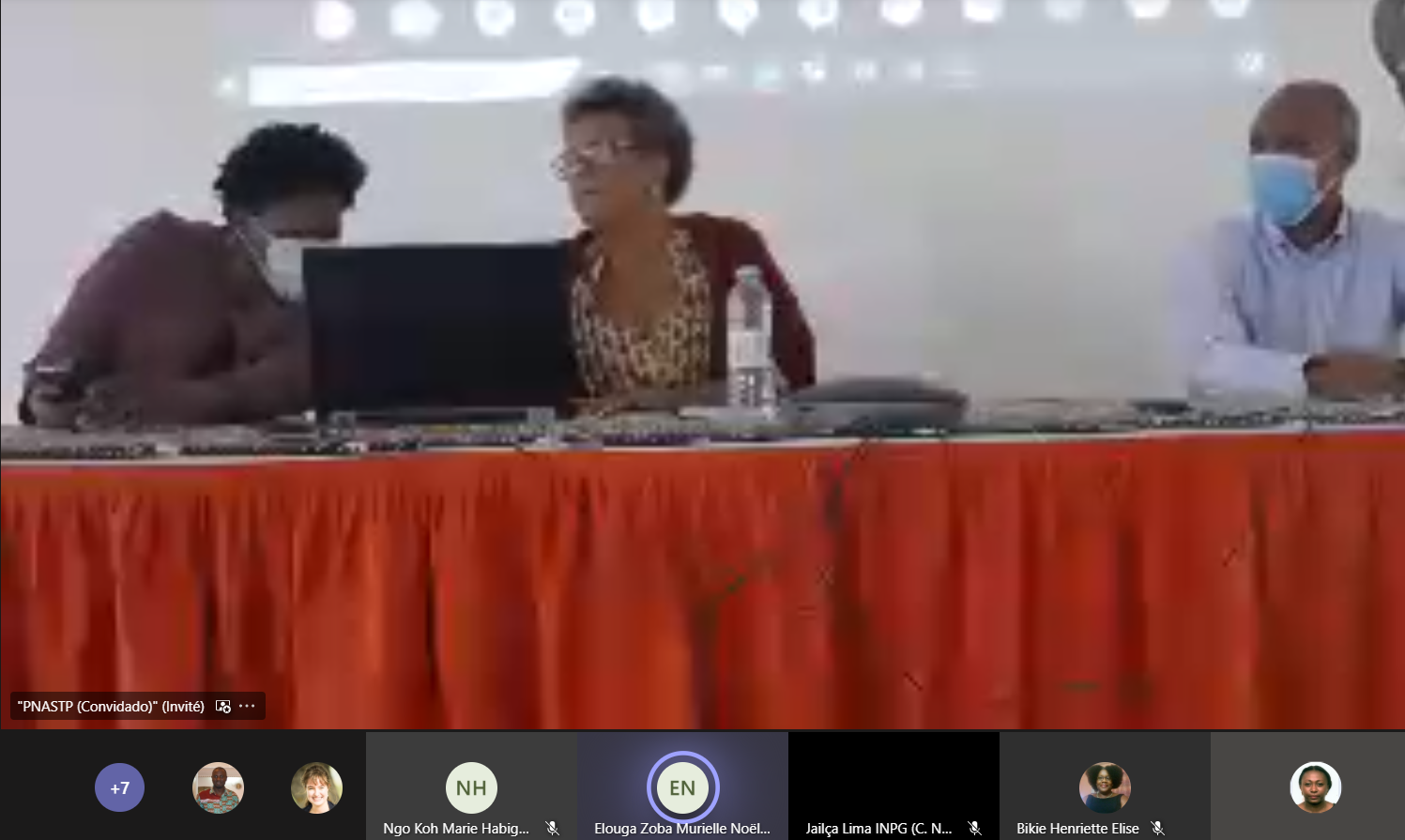 To ensure the participants have a clear definition of gender and its key concepts, the first part of the training by Murielle Elouga, WACDEP-G Cameroon Program Coordinator focused on the difference between gender (a social construct in which society defines the roles of men and women) and sex (defined biologically, obtained naturally) and how gender manifests. She further presented the Gender Equality Continuum Tool and the five stages (Gender Blind, Gender Neutral, Gender sensitive, Integration of Gender and Gender transformative) to the participants. Prior to this, participants shared their personal opinions on gender in a bid to identify and clarify common gender misconceptions. 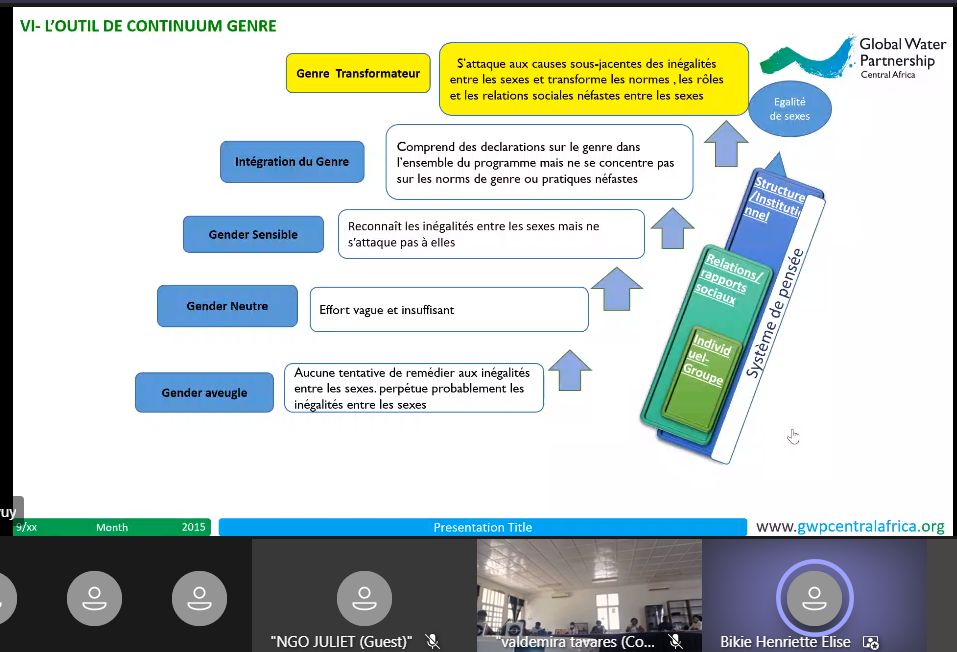 The results of a STP gender analysis study carried out by GWP CAf through a consultant were presented to the participants in Portuguese by the consultant, Mme Jailça Lima. The gender analysis revealed that gender inequalities exist in the water and climate sector and so far, certain informal actions that seek to address these inequalities have been implemented hence, the urgency to implement the gender transformative approach in the country to formalize solutions and propose new ones to reduce gender inequalities in the sector. 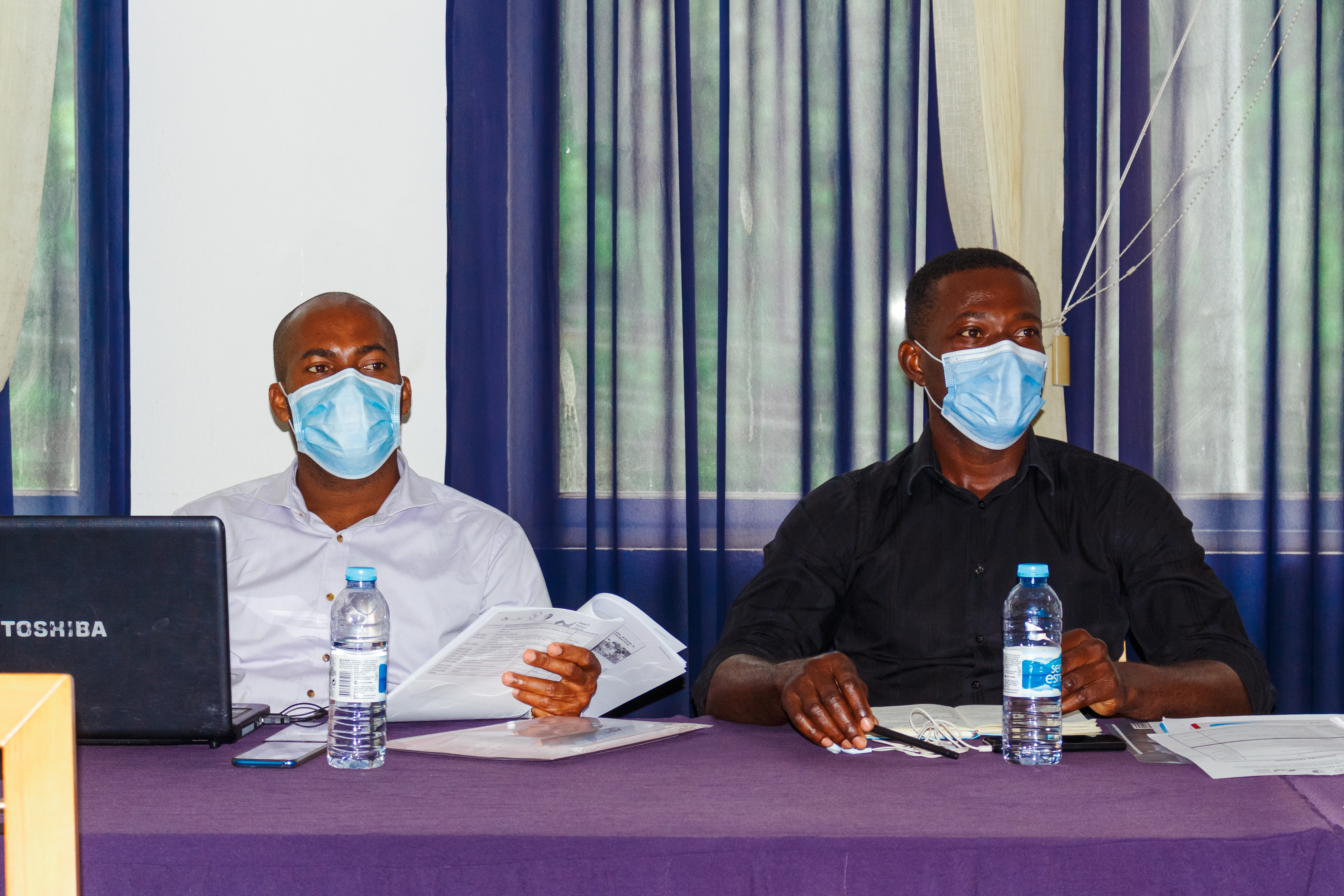 The focus of the second day was the Gender Responsive Budgeting (GRB) with the objective to enable the participants master the process and practical tools of GRB, so that they are immediately capable of developing a gender responsive budget. GRB was presented by the GWP-CAf Gender Expert, Henriette Bikie and she described it as "a means by which the State makes visible different resource allocations taking into account the specificities of the population, especially women".  She highlighted the preconditions for GRB implementation, GRB formats and processes and the tools for the GRB implementation.

The third and final day of the training, focused on gender planning tools and the formulation of indicators, a subject which was presented by GWPO, Gender expert, Dr Liza Debevec. She made it clear that gender planning should be based on the reasoning that "men and women have different roles in society and therefore often have different needs”. She then outlined the multiple frameworks for gender analysis and presented the MOSER gender planning framework, its six tools and limitations. She concluded by presenting the web of institutionalization as a tool for gender analysis.

Following this presentation, the participants were divided into four working groups to brainstorm on gender planning and indicators clearly showing the importance to their sector, the information base, Key Performance Indicators, identify implementation partners and sustainability. At the end of this working session, the facilitator thanked all the participants for their active and productive participation before handing over certificates of participation.

The overall objective of the AIP WACDEP-G is to transform gender inequalities at scale by promoting gender-transformative planning, decision-making and institutional development for climate-resilient water investments in Africa. 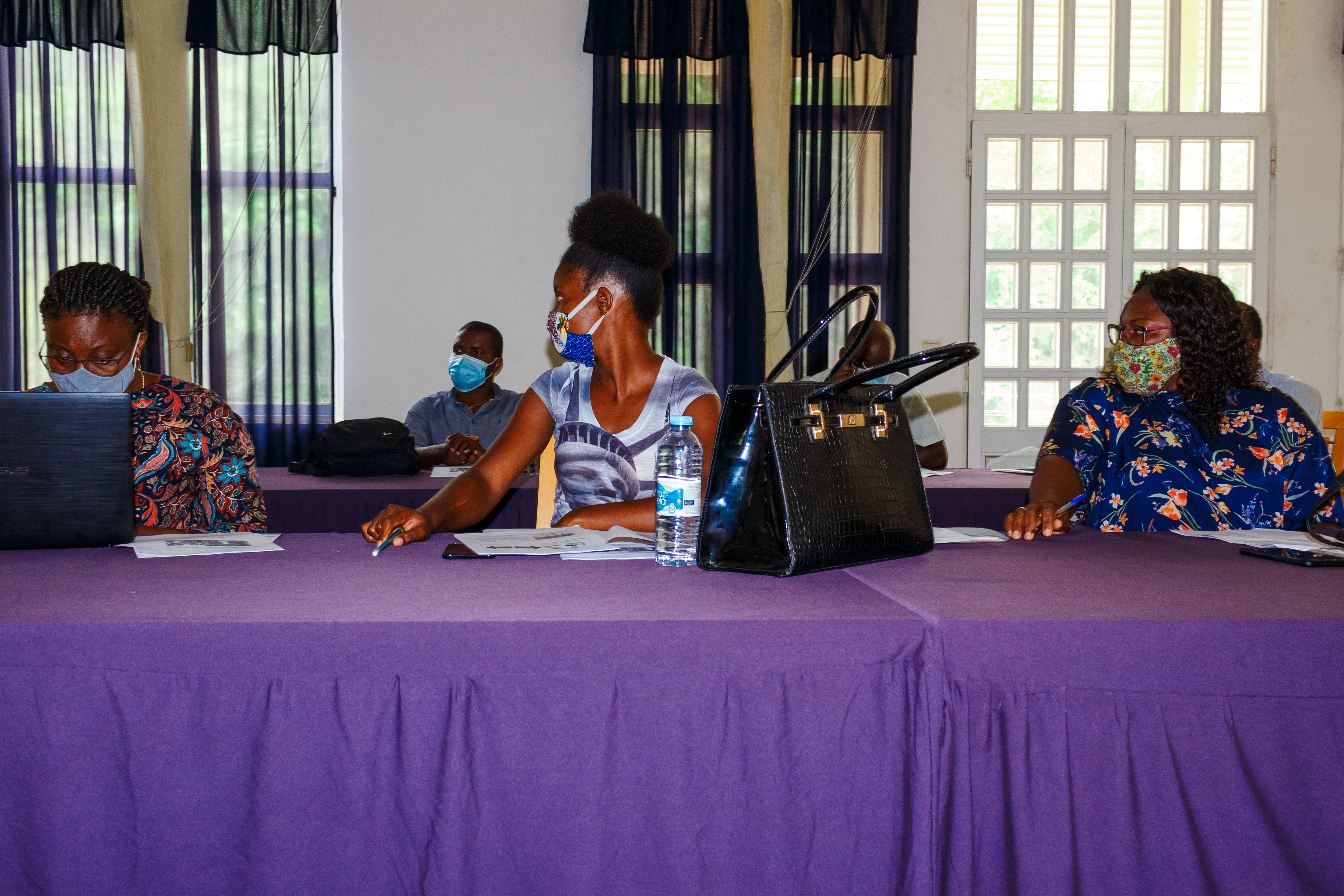 The government of Sao Tome has embarked on several reforms by adopting the results-based and gender-sensitive management approach. Improved public financial management and poverty alleviation are at the heart of these reforms, which were undertaken mainly to overcome the difficulties the country faces in equitably and efficiently allocating resources to development projects. It is within this framework that an assessment of the gender training needs of actors in the water sector was carried out and a training organized to provide an effective response to these needs through strengthening the actor’s capacity in gender and gender budgeting.

Global Water Partnership through its gender action piece and gender strategy is committed to promoting gender equality in the water and climate sector – a commitment which is shown through its role as an implementing partner of the AIP WACDEP-G project.