Mr Sylvain GUEBANDA, from the Central African Republic, was appointed President of the GWP-CAf during the GWP-CAf Steering Committee on 31 October 2019 in Douala, Cameroon.

Mr Sylvain GUEBANDA is a rural engineering engineer, specialized in water resources management.  A graduate in agricultural hydraulics, he currently holds the position of Project Manager in the field of Hydraulic Resources and Chairman of the Steering Committee in charge of implementing the process of drafting the CAR National Water Policy document. During his career, he has held many honorary positions in the water sector in his country. He is the Vice-President - Central Africa of the African Ministers' Council on Water (AMCOW), in charge of coordinating and leading AMCOW's activities in Central Africa (since 2016). From 2017 to the present day, he is in charge of supporting the implementation of the Central African Regional Water Policy of ECCAS in CAR as a Focal Point.  He was for a long time President of the CAR Country Water Partnership and a member of the GWP-CAf Steering Committee (2009/2017). 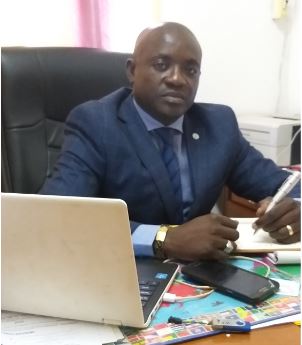 The statutory texts of the GWP-CAf stipulate that the term of office of the Chair is 2 years, renewable once. For 4 years, it was Ligia Cristina Soares de Barros who held this position. At the end of her term, Ms. Barros initiated the recruitment of the next Chair of the GWP-CAf. The applications received were examined by the GWP-CAf Steering Committee on 31 October 2019. This is how the application of Mr. GUEBANDA Sylvain was selected.